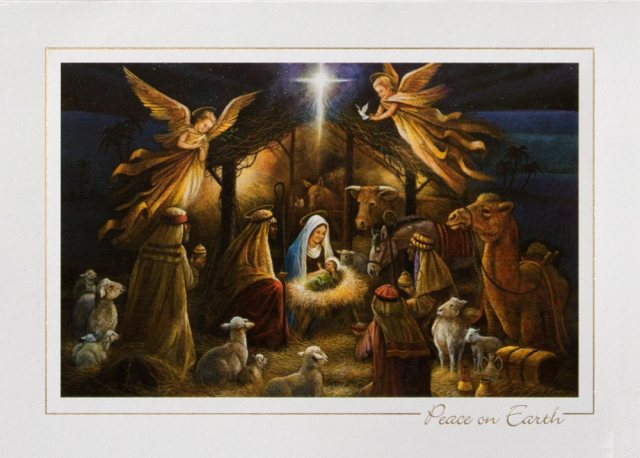 At this time of year throughout Christendom churches and homes (no longer, it appears, governmental institutions) recreate for display the scene of Jesus’s birth. Actually, they depict not the birth itself but a moment in time afterward. How long afterward? That is a question that cannot be satisfactorily answered. The reason is not because historians and biblical scholars can’t estimate the span of time between, say, the birth of Jesus and the arrival of shepherds from their fields, or the birth and the arrival of magi from the East. It is because those arrivals are depicted in different gospels and are therefore, incongruent.

The story of Jesus’s arrival featured in the Gospel of Luke tells of shepherds who arrive quite soon after Jesus is born. The magi of the Gospel of Matthew, on the other hand, seem to make their appearance in Bethlehem about two years after Jesus’s birth. That is because, after meeting the magi and discovering their purpose for being in Judea, Herod the Great, King of the Jews, finds out where they are bound, and orders the slaughter of every male child in Bethlehem less than two years of age. It’s not a pretty picture of course and one understandably left out of nativity scenes.

This difference in timing between the visitations recounted in the two gospels ought to alert the reader that story elements from multiple sources have been employed to artistically recreate the nativity. The images of the manger, a star, angels, animals, shepherds, magi, and so forth, derive from a number of ancient texts both canonical and apocryphal. Let’s explore the popular nativity display, also called a manger scene or crèche, and trace its various components.

Obviously the primary sources for information about the birth of Jesus come from the New Testament Gospels of Matthew and Luke. Each story both differs from, and agrees with, the other in multiple ways. One story element to which both agree is the presence of Jesus’s two parents, Joseph and Mary. Every nativity scene features the two parents of Jesus looking down approvingly upon the newborn child. But, as far as the gospel stories go, that is where the commonality ends in nativity displays.

The Gospel of Matthew reports that a moving star led magi from the East to Bethlehem then stopped directly over the exact location of Jesus’s birth. No modern nativity scene is complete without this star, be it a mere C7 light bulb or a handsomely luminous astronomical effect. The Gospel of Luke, on the other hand, features no star. It reports instead that shepherds in nearby fields were alerted to the birth of Jesus by an angel. The shepherds (and perhaps the angels as well, according to most nativity displays) then go to Bethlehem where they find Jesus in a phatnē, a Greek word that can simply be translated as crib but which most English Bibles prefer to call a manger or stall. As Luke explains, this was because there was no room for Joseph and Mary in the kataluma, Greek for “guest chamber.” The guest room(s) being otherwise occupied, the expectant couple was probably directed down below the primary dwelling to the cave-like cellar where produce, wine, and sometimes animals were kept. It was dark, cool, and private. Nevertheless, artists have almost unanimously chosen to depict the newborn Jesus in a barn lying in an animal food trough. And nearly every display follows Luke by showing Jesus wrapped in strips of cloth, or “swaddling clothes.”

According to the imagery in many nativity representations, the shepherds seem to have felt obliged to bring some of their sheep with them into the birthing room. And it gets worse. Second-century literary expansions of the gospel narratives added to this menagerie both an ass and an ox. How many cellars in the first-century (or ever, for that matter) were populated with these prodigious beasts? Credit the presence of the two creatures to the second-century Infancy Gospel of Pseudo-Matthew. In that apocryphal retelling of the nativity story, an ox and an ass are placed beside Jesus in order to fulfill a prophecy from the Hebrew scriptures (Isaiah 1:3), “The ox knows its owner, and the ass its master’s crib; but Israel does not know, my people does not understand.” Notice the word “crib,” not food trough. One more thing about that intrusive ass: many artistic representations of Joseph and the very pregnant Mary trudging their way from Nazareth to Bethlehem in response to a (historically suspect) Lukan census show Mary riding a donkey. This mode of travel is likewise first narrated in Pseudo-Matthew. Perhaps it is intended to be the same exhausted animal as the one lying in the cave?

Over time, the zoo surrounding the birth of Jesus as represented in nativity art continued to grow. Ever see a camel or two lying about? Were these the means of transportation utilized by the magi? Perhaps, but the third-century Legend of Aphroditianus notes that the magi came and returned by horseback. They travel on foot according to the second- or third-century Revelation of the Magi. But let’s assume that they traveled by camel train anyway. How many camels would it take to bring our eastern astrologers to Judea? The answer depends, at least in part, on how many magi came to Bethlehem (not counting their entourage). The problem is: the Gospel of Matthew does not tell us. There is no modern crèche that I have ever seen that depicts more or less than three magi. But Christians were not always agreed. The fifth-century Opus imperfectum in Matthaeum counts twelve magi; other texts name them! Early catacomb art depicts two and four magi as well as twelve. That there were three is probably once again due to Pseudo-Matthew which apparently numbered the magi based on the gifts they brought: “They opened their treasures and gave expensive gifts to Mary and Joseph…one offered gold, another incense, and the third myrrh.”

Scholars tell us that the magi were once a priestly caste but by the time of Jesus the term could encompass anyone associated with astronomy, fortune telling, dream interpretations, and magic. Since Matthew says they came from the East, points of origin might include Persia, Babylon, or Arabia. Why, then, the popular Christmas carol, “We Three Kings of Orient Are?” Sometime before the sixth century, the astrologers were turned into potentates. An early example of this re-characterization can be seen in the Syriac Cave of Treasures (“These are they who bore offerings to the King, kings, the sons of kings:” Hormizdah, king of Persia; Izgarad, king of Sabha, and Perozadh, king of Sheba). The change likely incorporates reflections on prophecies in the Hebrew Scriptures which predicted that Gentile kings would one day worship the Jewish God at Jerusalem. An example can be found in the Psalms (72:10): “May the kings of Tarshish and of the isles render him tribute, may the kings of Sheba and Seba bring gifts.”

And what about those odd names given above to these Eastern astrologer-kings? The New Testament does not name the magi but later Christian writers creatively filled the gap in our knowledge.  Perhaps the earliest set of names, and certainly the most enduring, comes from the 6th-century Excerpta Latina Barbari: Bithisarea, Melchior, and Gathaspa (better known as Balthasar, Melchior, and Gaspar). And one final thing about those kings: most nativity displays feature one African king. Why is this since the magi are said to have come from east of Judea? Sometime around the seventh century, Christians began to envision the visiting kings as representing each of the “three” human races: Asian, African, and European. Thus, according to the contemporaneous Excerpta et Collectanea, Melchior, the European, was “an old man with white hair and a long beard,” Gaspar, the Asian, was “young and beardless and ruddy complexioned,” and Balthasar, the African, was “black-skinned and heavily bearded.”

It took over six centuries to create the nativity displays now ubiquitous throughout the Christian world. As artistic representations they do not carry the weight of religious dogma nor are they to be considered heterodox in their combination of various elements from across time and textual traditions. Rather, nativity scenes are pious re-imaginings of an event crucial to the Christian profession of faith and rich in narrative and pictorial possibilities.

One thought on “Elements from the Christmas Nativity Display: What Gospel Does That Come From?”