I am happy to announce that the official cover artwork and title for my forthcoming book from McFarland has just been released! The book will be featured in their spring catalog for release in 2016. I’ll post further updates as I get them. 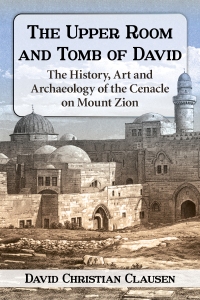 In the last installment in this series of articles we saw that women, like men, were joining the new movement founded on the belief in the risen Jesus and, also like men, were being persecuted for it. But the traditions tell us there was a definite upside to such faith as well.

Peter, the leading missionary apostle to Jews in the Holy Land and beyond, was preaching the gospel on his way toward the Mediterranean Sea and, according to Acts, made a stop at Joppa on the coast. Joppa had been a maritime cargo port ever since Solomon had it built to receive imported cedar timbers from Lebanon for use in the construction of the first Jewish temple in Jerusalem around 1,000 BCE. Formerly a Phoenician town, its name meant “beautiful.” Later invaded by Greeks, it was liberated for the Jewish people by the rebellious Maccabee family in the second century BCE following which it became the principal port of Judea. The Romans began to occupy it in 6 CE. Thirty years later, Peter had come to Joppa after being summoned by two of its resident Christian disciples (women?). They found Peter in Lydda, about 10 miles away, and inquired as to just what he could do about a fellow disciple named Tabitha who had only recently died (Acts 9:36-41).

The Aramaic name Tabitha meant the same as its Greek form, Dorcas: “gazelle.” It seems to have been rather common at this period for women, especially slaves, to be named after female animals. She may have been a former slave now freed. On the other hand, there is evidence that Tabitha was simply used as a name for Jewish girls. She is described in Acts using a word that will never reappear in the New Testament: mathētria, “female disciple,” indicating perhaps her respected position both within the Joppa Christian community and in Christian tales and legends that may have circulated about her in later decades. END_OF_DOCUMENT_TOKEN_TO_BE_REPLACED

In reports filed online yesterday, it seems archaeologists may have found remains of the fortress built just before the time of the Maccabees (2nd century BCE) that once overlooked the Jewish temple in Jerusalem. (For one report, go to: http://www.cnn.com/2015/11/04/middleeast/israel-acra-discovery/.)

Remains of the citadel and tower (Photographic credit: Assaf Peretz, courtesy of the Israel Antiquities Authority).

The fortress, built by the Greek Seleucids who governed Palestine from about 200 to 164 BCE., is known in Greek as the Acra. It was built, according to 1 Maccabees 1:35–38, during the reign of Antiochus IV Epiphanes, the Seleucid ruler responsible for inciting such opposition among the Jewish people by virtually banning the practice of Judaism that the Maccabean revolt was launched.

The excavation’s directors, Doron Ben-Ami, Yana Tchekhanovets, and Salome Cohen, discovered the remains of the Acra underneath a parking lot on the south side of the Temple mount.

“Artifacts retrieved from the site include lead sling shots, bronze arrowheads and ballista stones stamped with a trident, a symbol of Antiochus IV Epiphanes. Other items like amphorae — wine jars — which were imported from the Aegean region, also point to non-Jewish inhabitants.”

Lead sling stones and Bronze arrowheads stamped with the symbol of the reign of Antiochus Epiphanes -evidence of the attempts to conquer the citadel. (Photographic credit: Clara Amit, courtesy of the Israel Antiquities Authority)

The Acts of the Apostles is one of those New Testament texts that is often overlooked in favor of the gospels or letters of Paul. Nevertheless, it is a fascinating document, full of history, mystery, and hidden clues as to the activities and personalities within the early Jesus community. From a historian’s point of view, we must be cautious about accepting everything written in Acts at face value. But by exercising some discretion, we can learn a lot from the ancient traditions preserved in its pages. In this series of articles, we will examine the many contributions of women to the new messianic movement founded on the memory of Jesus according to Acts.

Some scholars argue that the author of Acts emphasizes the role of women only to show how they are subordinate to men, reflecting the conflict over gender roles that existed within the churches of the author’s own time (late 1st or early 2nd century). While there are probably some reflections of the concerns of that later period in Acts, I think, on the whole, women in the post-Easter church are portrayed in a generally positive manner considering the patriarchal nature of society at this time.

The first Jewish woman named in Acts (5:1-11) is, admittedly, portrayed in an unflattering manner but so is her husband. Sapphira (Aramaic = Ŝappîrāh, “beautiful one”) was married to a relatively wealthy man or was wealthy herself. She and her husband Ananias (Hebrew = Hananiah, “Yahweh has shown favor”) were at least successful enough financially that they could afford to sell a piece of real estate in order to donate a large share of the proceeds to the new movement centered in Jerusalem. Their plan was to retain some of the income for themselves, perhaps creating a private rainy day fund. Acts has heavily reworked this folkloric tale, but from what can still be determined there seems to have been no particular moral or ethical problem with the couple’s plan as such. A serious issue arose, however, because they lied by either announcing or implying that they would contribute all of the proceeds to the movement’s general coffers, a sort of community chest used to support the membership. Their deception was considered tantamount to lying to God since the Jerusalem leadership was being guided by the Holy Spirit. At this point, the story turns fanciful and even incredible. END_OF_DOCUMENT_TOKEN_TO_BE_REPLACED