In an article published in 1983, Bianca and Gustav Kühnel draw our attention to what may be the only Crusader-era capital remaining in the Upper Room of the Last Supper on Mount Zion in Jerusalem. Now supporting the qubba (dome) over the stairway between the upper and lower chambers, the capital was apparently re-used by medieval Muslim architects and placed in its current position. 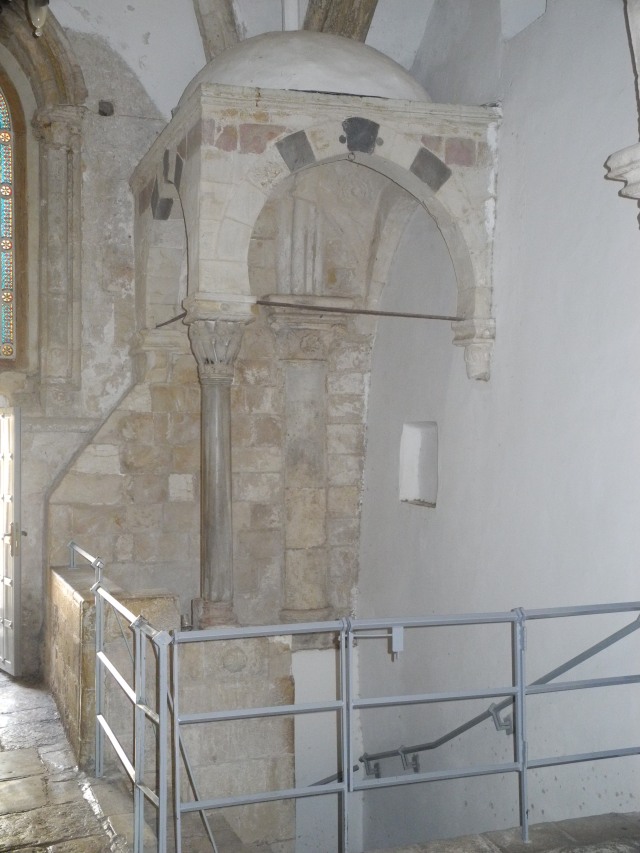 In style and size it is quite different from the capitals atop columns found elsewhere in the building. The authors point to the unique combination of motifs carved into the capital that reflect a developing Christian symbolism that combines the eagle, the rock, Christ, and Satan with baptism and the Eucharist. On the face of each capital are three eagles – the one in the center looks to the side as two other eagles (chicks?) place their heads upon its breast. Barely visible in their enlarged bills are small stones. The center eagle stands atop a frightening mask like a human face. 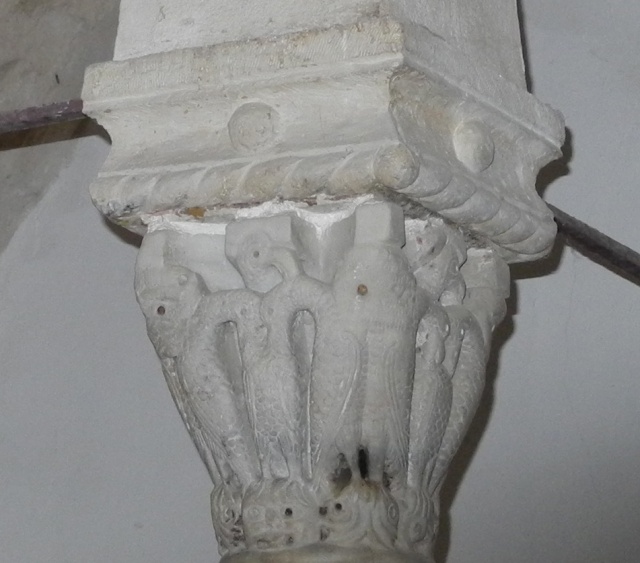 The Kühnels trace the development of the symbolism. In his first letter to the Corinthians (10:4), Paul writes of the water miraculously provided to the Hebrews who wandered in the desert for forty years with Moses: “They drank from the supernatural Rock which followed them, and the Rock was Christ.” Early church fathers also equated Christ, imagined as having flown back to his Father after his resurrection, to an eagle. In Greek mythology, the sea eagle could only rid itself of its incapacitatingly large bill by breaking it against a rock thereby allowing him to eat. This represented a conquest of old age and death. Writing to Christians of the fifth century, Augustine combines these and other motifs: “Old age sealed your mouth; the stone was given to you in order to vanquish old age and to renew your youth as the eagle did, in order to be able to eat the bread, that bread of which has been said: I am the living bread which came down from Heaven (John 6:41).” Here the stone symbolically becomes Christ in the form of the Eucharist. The eagle could likewise serve as a symbol of the communicant. And as the eagle is the natural enemy of the serpent, the serpent retains its representation as Satan.

According to the Kühnels, the twelve eagles on the capital represent the congregation of believing Christians. The stones they each hold in their oversized beaks are the bread of the Eucharist. The four medieval masks they stand upon represent Satan, symbol of death, who is conquered by those who partake of the life-affirming Eucharist. All in all, these are fitting motifs for the so-called Upper Room of the Last Supper.

According to the Kühnels, capitals with similar depictions have been found carved upon other twelfth-century capitals in Europe, particularly in France, as well as in Crusader-period Jerusalem structures. The date of the capital may be further narrowed to the time of the reign of Fulk V, Count of Anjou, and King of Jerusalem from 1131-1143.

Bianca and Gustav Kühnel, “An Eagle Physiologus Legend on a Crusader Capital from the Coenaculum,” in Norms and Variations in Art: Essays in Honor of Moshe Barasch (Jerusalem: The Magnes Press, The Hebrew University of Jerusalem, 1983), 36-48.

2 thoughts on “The Last Surviving Crusader Capital in the Cenacle”